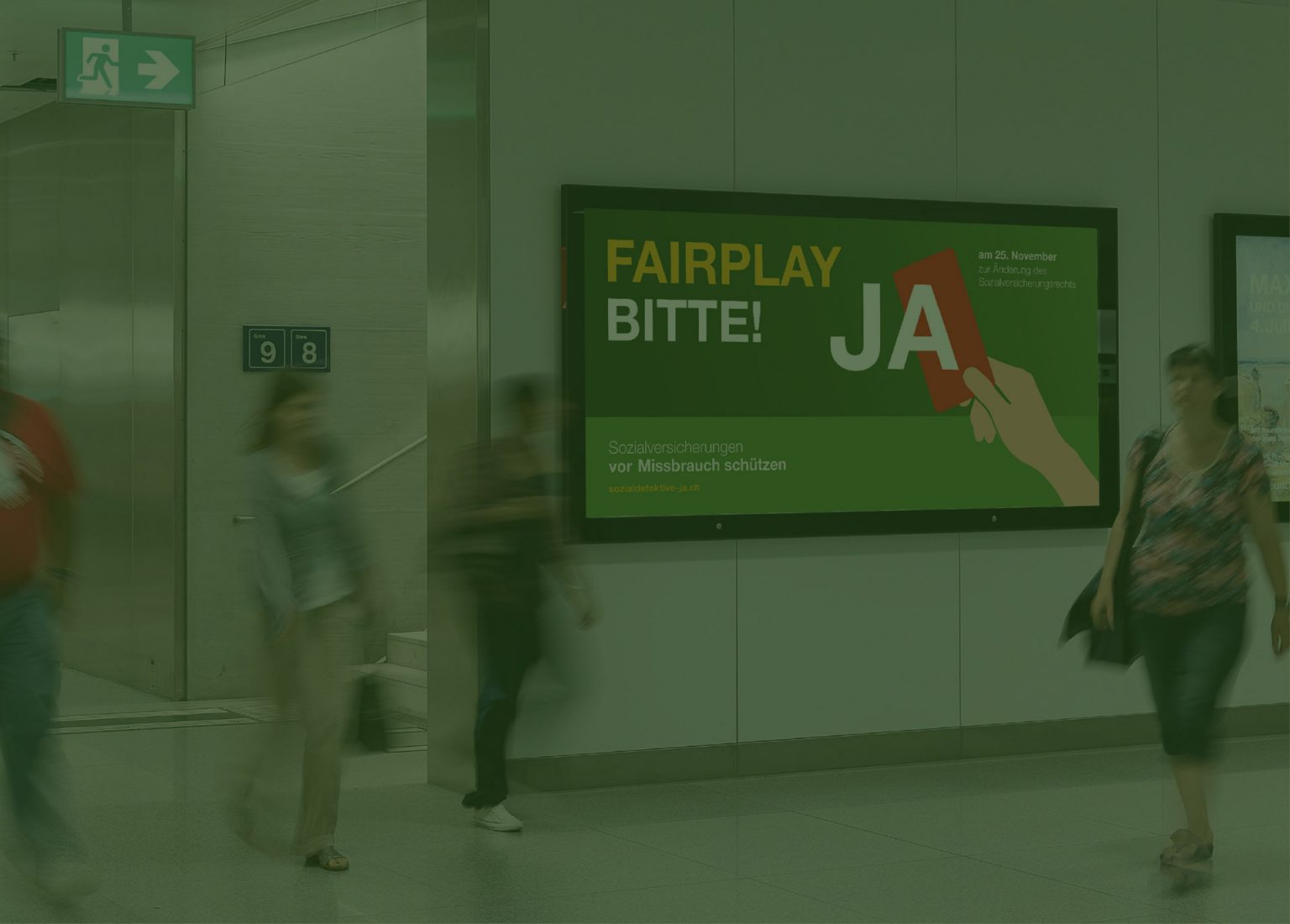 The committee «JA zu Fairplay im Sozialversicherungsrecht» hired Enigma to develop and execute the campaign for a revision in the social security law. If this pro-campaign was successful and the referendum defeated, social security organizations would once again have the authorization to use detectives to investigate and uncover potential frauds.

The counterparty launched their campaign in no time and was already successfully rallying for support to their cause on social media. The goal was to outperform them with our pro-campaign and bring the people over to our side. To reach said goal, Enigma created an influential campaign to demonstrate the committees firm conviction and belief, without being pretentious.

The pro-committee had to build momentum quickly to be able to compete against their competitors. First, Enigma used its proven analytical approach to gauge the political dynamic around the issue. Debates, imagery and digital presence of both sides were studied and used to determine the strongest arguments supporting the change of law. Simultaneously, an emotive analysis – the analysis of the emotional climate surrounding the debate – on social media platforms uncovered indifference to the topic. Using split tests with different messages and imagery, we understood which arguments and visual concepts generated the most positive reactions in different regions of Switzerland. These findings served as a basis for Enigma to develop optimized content to generate the desired impact on the defined target group.

The extensive analysis showed that the people do not tolerate any abuse of the social security system. The slogan “Fairplay bitte!” with a picture of a drawn red card conveyed the corresponding message: social security fraud is an intentional foul against solidarity.

To convey the right message for the right audience at the right time was crucial for the strategy.
Potential risks to the campaign had to be identified before the launch. A huge poster campaign would have implied to win people over with extensive financial means, but not using posters at all for a political campaign in Switzerland would be a risk as well. Classical measures had to be combined with digital ones. Enigma built an interactive and agile campaign, which didn’t appear as too offensive, while communicating extensively. We continuously updated resources, messages, and imagery. Thanks to precise targeting, relevant content was presented to potential – and especially uncertain – voters.

In the digital fields, the opposing commitee was already well positioned. From zero, we had to build a strong digital presence, including a landing page with considerable traffic. To achieve this, we used engaging content to strategically spread our core arguments on social media. Enigma also created and moderated an engagement-campaign on Facebook, which was intensively used as an exchange platform for heated arguments by the two opposing sides.

We spread the pro-arguments using authentic video testimonials by supportive members of the national council and the council of state. This demonstrated a broad, national alliance backing the change of law. An explanatory video illustrated the analogy between the referendum and a game of football: Referees need to have the possibility of video assistance if they suspect a foul. Just like that, social security organizations need to be able to observe potential scammers.

A Swisswide coordinated poster campaign placed at key traffic points ensured a strong presence in public space. As soon as people receive their voting leaflets, it’s important to mark a strong presence. So we used mass mailing to send important information to people living in rural areas and on city borders. Ads in local newspapers and various handouts supported the mailing.

While the opposing committee received unwanted mentions in the news for surprising actions, we strategically influenced the mass media with reasoning and compelling arguments.

First calculations already made clear that the people would vote for a change of the insurance law. Hundreds of thousands of conscious interactions on social media and immense traffic to the campaign website made sure that the voters were constantly confronted with pro-arguments. Combined with the dialogue held online, a clear statement emerged: Yes to fair play in social security law. Finally, 64% of the population voted in favor of the change.